Native to South America, <strong>Red Imported Fire Ants</strong> make their homes underground. These nests are subject to flooding during rainy periods. On its own, a single fire ant Solenopsis invicta will struggle to stay afloat in water, and may even drown. Together though, these ants can form living rafts by linking their bodies together. These rafts enable a large group of thousands to stay alive for days or even months at a time. 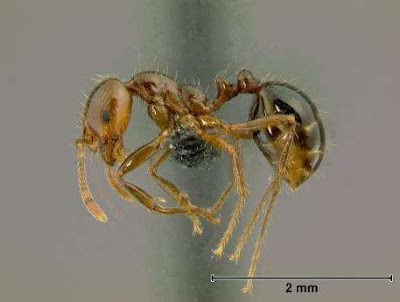 By itself, the body of a single Solenopsis invicta is hydrophobic, mainly due to a waxy coating on the ant’s exoskeleton which repels water. 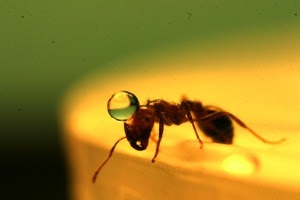 When groups of Red Imported Fire Ants join together, they trap air bubbles among themselves, and increase the coarseness of the overall raft. This rough texture does not allow the water to spread out across the surface and instead the surface tension forms a layer around the mass of ants.

Any ants that are on the bottom of the raft are then left with pockets of air, which they can breathe. A second layer is formed on top of the first to ensure the structural stability and water resistance of the craft. This instinctive behaviour greatly increases the survival of the colony, which may explain why it has survived to become one of the largest fire ant species in the southern United States.

Elsewhere on the internet

Other places you can find me online